Feeding Forward is an app created by Komal Ahmad of Berkeley University to save the 263 pounds of food that’s thrown away in America every day. 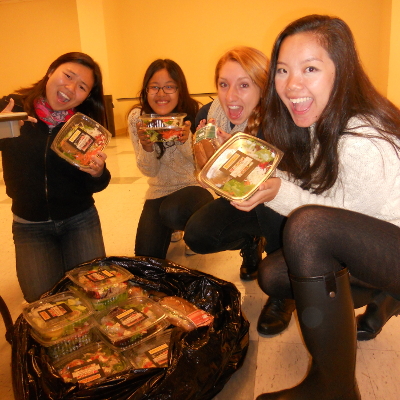 “Food is a fundamental human right, and it’s staggering that in such a wealthy and powerful nation, so many people end up begging for it, while in our homes, restaurants, supermarkets, dining halls, and offices, we waste so much,” Ahmad said. She explained, ” Potential donors only need to enter a brief description of the food, snap a photo of it with their smartphone, and specify when the food needs to be picked up and how big a vehicle will be needed to transport it. The app identifies the donor’s exact location and sends details about the food to a virtual marketplace, using an algorithm to match the specific food type (e.g. “sandwiches” or “fruit”) with a human service organization that can use the food at that particular day and time. The app also identifies nearby members of Feeding Forward’s brigade of volunteer transporters who can pick up the food, usually within the hour.”

That’s not all: after the brigade drops off the food, the donor receives a picture of the homeless shelter where the food’s been handed over. Now that’s Rad!

As of now, Berkeley’s Silver Pizzeria is a hard core loyal of the Feeding Forward app. Dining halls, concession stands and tech companies are joining the bandwagon.

Feeding Forward is on a Feeding Frenzy!

Related Topics:hungryleftoversleftoverswaprestaurantswhat to do with leftovers
Up Next

5 Christmas Breakfasts to wake up to

Meet the Meat-less Butcher from America