Using the Nissin Cup Noodles and sautéing it with Biryani Masala and some stir-fried vegetables, the co-owner of Curry Up Now makes Biryani Cup Noodles. FoodBeast reports that the restaurant is quite popular in the bay area owing four food trucks and six restaurants all selling Indian street food.

The report says that the food served by Curry Up Now is an elevated version of Indian food that includes dishes like tikka masala burritos, criss-cut sweet potato fries and kofta fauja singh. The Biryani Cup Noodles are the innovation of Chef Rana Kapoor also the co-owner of the restaurant who claims that the Cup Noodles was one of her favourite childhood dishes, of course after adding some masalas to perk it up. 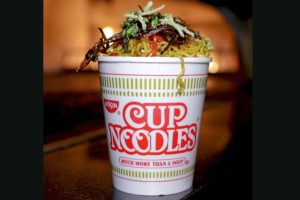 FoodBeast further talks about how Rana always spruced up her Cup Noodles with Biryani Masala and sautéed onion and sesame and has recreated her childhood favourite for Nissin’s Dream Cup Series. The Biryani Cup Noodles is tossed in the Biryani Masala which is a blend of 15 spices along with ginger garlic paste, sautéed vegetables and served with fried onions, julienned ginger, roasted sesame and onions seeds on top.