It has been ten days into what is called the “agni natchathiram or khatri”, the hottest spell of summer according to the Hindu calendar and the heat, true to the schedule, is peaking up day by day. As a trusted means of battling the heat, buttermilk is already being served at various locations in Chennai and the numbers are only going to go up.

The benefits of buttermilk during summer is an age-old fact that has been passed on to generations. Starting from avoiding indigestion when consumed after a meal, improving immunity and keeping the body cool to reducing blood pressure, lowering cholesterol level and keeping the heart healthy, buttermilk has a massive impact on our health. Not just that, buttermilk also speeds up our fat metabolism, thus making it a summer drink that’s perfect for losing weight. 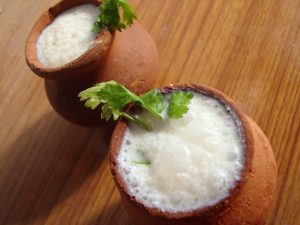 “It is an age-old remedy to beat the heat. In South India, we consume it not only in summer but drinking buttermilk on a daily basis after a meal helps fight infection and poor health,” a 72-year-old resident M. Bhavani told DC.

“We buy milk and churn it into curd at our homes, after collecting the buttermilk from various households; we distribute it to the public. More than 500 people including students, auto-rickshaw drivers and pedestrians are served buttermilk daily,” says Vittal a member of a welfare association in AGS Colony in Velachery that distributes buttermilk daily in their locality. The buttermilk that is laced with curry leaves, coriander, salt, and asafetida is prepared in such a way that it serves as a wholesome health drink to beat the heat.

Dietary experts are all in for the consumption of buttermilk during the summer. “Buttermilk is healthy as it quickly cools down the body temperature. Especially for women, drinking buttermilk relieves from hot flushes that occur in pre-installed and postmenopausal stage aiding and alleviates the feeling of puffiness. It is a curd-based drink, loaded with probiotics that reduce the risk of cancer,” is dietician Harini Parthiban had to say to DC about buttermilk, which is rapidly becoming the drink of the season.

A simple woman who believes that words have the potential to change the world, she is a foodie at heart with a passion for literature, psychology and all things Harry Potter.